Part one of our series, "Kingdoms in Conflict: A Study of the Book of Daniel."

1. In your life and the world around you, how do you see the paradigm of “kingdoms in conflict” playing out?

King Belshazzar made a great feast for a thousand of his lords and drank wine in front of the thousand. -Daniel 5:1

In the third year of Cyrus king of Persia a word was revealed to Daniel, who was named Belteshazzar. And the word was true, and it was a great conflict. And he understood the word and had understanding of the vision. -Daniel 10:1

For the kingdom of God is not a matter of eating and drinking but of righteousness and peace and joy in the Holy Spirit. -Romans 14:17

2. How are the values of the kingdoms of man different from the kingdom of God?

3. What are some ways that you have found yourself in the midst of conflicting kingdom values in your work, school, recreation, relationships, social life, etc?

“The earthly city has made for herself, according to her heart's desire, false gods out of any sources at all, even out of human beings, that she might adore them with sacrifices. The heavenly one, on the other hand, living like a wayfarer in this world, makes no false gods for herself. On the contrary, she herself is made by the true God that she may be herself a true sacrifice to Him.” -St. Augustine, City of God.

1. What might it look like to love, serve, and live among our friends, family, and neighbours who’s values we are at odds with?

Walk in wisdom toward outsiders, making the best use of the time. Let your speech always be gracious, seasoned with salt, so that you may know how you ought to answer each person. -Colossians 4:5-6

Let no one seek his own good, but the good of his neighbour. Eat whatever is sold in the meat market without raising any question on the ground of conscience. For “the earth is the Lord's, and the fullness thereof.” If one of the unbelievers invites you to dinner and you are disposed to go, eat whatever is set before you without raising any question on the ground of conscience… So, whether you eat or drink, or whatever you do, do all to the glory of God. Give no offense to Jews or to Greeks or to the church of God, just as I try to please everyone in everything I do, not seeking my own advantage, but that of many, that they may be saved. -1 Corinthians 10:24-27, 31-33.

2. What does it mean that we are exiles and strangers in this world? How have you experienced that reality?

3. How is it possible for Biblical faith to thrive in the midst of that exile?

4. What forms might intentional discipleship of ourselves, our families, our friends in Christ take in the midst of our exile?

5. How are you practicing intentional discipleship...what has been fruitful...what are you convicted to do more of?

…conduct yourselves with fear throughout the time of your exile, knowing that you were ransomed from the futile ways inherited from your forefathers, not with perishable things such as silver or gold, but with the precious blood of Christ, like that of a lamb without blemish or spot. -1 Peter 1:17-19

When Daniel knew that the document had been signed, he went to his house where he had windows in his upper chamber open toward Jerusalem. He got down on his knees three times a day and prayed and gave thanks before his God, as he had done previously. -Daniel 6:10

1. Where have you seen or experienced pressure to conform to the ways of the kingdom of man with:

B) “The stick”? – the threat of punishment or loss

2. In those cases, what has made it difficult to resist? Easier to stand strong?

And the herald proclaimed aloud, “You are commanded, O peoples, nations, and languages, that when you hear the sound of the horn, pipe, lyre, trigon, harp, bagpipe, and every kind of music, you are to fall down and worship the golden image that King Nebuchadnezzar has set up. And whoever does not fall down and worship shall immediately be cast into a burning fiery furnace”. -Daniel 3:4-6

Do not be conformed to this world, but be transformed by the renewal of your mind, that by testing you may discern what is the will of God, what is good and acceptable and perfect. -Romans 12:2

3. How can we fulfil our call to remain firmly planted as faithful believers and diligent workers where God has placed us?

4. Why does it matter for us today that every kingdom of man will come to an end, but the kingdom of God is eternal and unshakable?

5. What might it look like for the church to not run and hide, but rather to live with conviction and steadfast hope in the world right now?

And in the days of those kings the God of heaven will set up a kingdom that shall never be destroyed, nor shall the kingdom be left to another people. It shall break in pieces all these kingdoms and bring them to an end, and it shall stand forever. -Daniel 2:44

I saw in the night visions, and behold, with the clouds of heaven there came one like a son of man, and he came to the Ancient of Days and was presented before him. And to him was given dominion and glory and a kingdom, that all peoples, nations, and languages should serve him; his dominion is an everlasting dominion, which shall not pass away, and his kingdom one that shall not be destroyed. -Daniel 7:13-14

For final reflection and prayer:

We are setting out to study the book of Daniel with joyful anticipation that through it, God will open our eyes and speak to our hearts with clarity and power. Let’s pray that through this book, God teaches us:

-To see and treasure Christ with a deeper love and greater zeal.

If God is convicting you of ways that you are walking more like a citizen of the kingdom of man than of the kingdom of God, bowing down to the idols of our age and culture, bring those ways before Him. Know that you are forgiven and free by the cross of Jesus Christ if you are in Him by faith. Know that He is calling you to walk with Him as a citizen of His greater kingdom which will never fall. Know that in every trial that comes with walking as an exile, a sojourner in the world, He is with you and for you. A thriving faith and a steadfast hope are ours in Christ, even in the midst of kingdoms in conflict, because He has already won the victory, He will establish His kingdom, and He is on the throne.

Will you open your heart and make room for what the Lord wants to do in you personally, and in us as a Church over the next number of weeks. Praise God that He is alive, moving, and working in us and in the world right now. 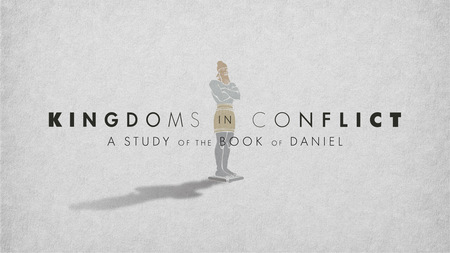